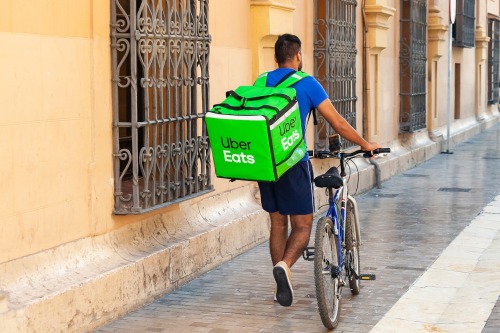 The nature of work in the platform economy is a vital question which has attracted the interest of many researchers, particularly in a pandemic context where remote working and delivery services have become increasingly vital. Platform work is often controversial and contested, associated with exploitative or casualised working conditions, and as such there have also been numerous studies of platform labour protest. However, to date, these tend to be single or small-n comparative case studies.

While such research is informative, and points to various instances where platform workers have successfully mobilised and built solidarity, they cannot tell us about wider global trends in platform labour protest. There is therefore a pressing need for macro-level analyses of platform worker protest on a global scale.

A team of researchers Dr Ioulia Bessa, Dr Simon Joyce, Denis Neumann, Dr Vera Trappmann, Dr Charles Umney and Professor Mark Stuart from Digit- The Digital Futures at Work Research Centre and  Centre for Employment Relations Innovation and Change (CERIC) has created a database- The Leeds Index of Platform Labour Protest (Leeds Index) – which catalogues reported instances of protest by platform workers across the world. Our aim is to develop a comprehensive reference point and an online interactive map to record and analyse instances of labour protest in the platform economy on a global scale. The Leeds Index intends to reveal regional patterns of protest and situate lessons of these disputes in a wider global perspective.

We use data from the Global Database of Events, Language and Tone (GDELT) which accesses worldwide news reports in 65 languages with real-time translation. The database records the outcomes of disputes, eventually enabling us to examine which strategies are more likely to lead to success for platform workers in contesting their working conditions. For each instance of reported platform labour unrest (i.e. each “protest event”), we identify the date and location, the cause of the dispute (be it pay, employment status, working conditions, or other issue), and the kind of dispute (for instance strikes, demonstrations, and legal actions). We also categorise the type of actor leading the dispute (differentiating between a mainstream trade union, independent trade unions, self-organized groups of workers, and coalitions).

The Leeds Index has attracted attention from different sources, and is particularly relevant to trade unions who are concerned about platform working conditions and representing platform workers.

In February 2020 we released a policy briefing for the European Trade Union Institute, which was the first stage in reporting lessons from the database. An initial set of 300 incidents of platform worker protest was analysed. These protest events were drawn from around the world from the time spanning January 2015-January 2020. The highest number of incidents emerged in three industries: food delivery, courier work and transportation. Findings revealed that the main cause globally for labour protest was pay, with considerable geographical variation when it comes to other causes for dispute. Mainstream unions play a vital role in defending platform workers’ interests and rely more frequently on legal challenges, especially in Western Europe, while in the global South, protests are much more likely to be led by grassroots unions and make fewer appeals to institutional or legal processes.

As the dataset extends we are working in collaboration with different institutions, which are supporting our effort to collect and analyse more data. This gives us the opportunity to work with specific sectors or regions, examine particular characteristics or isolate specific cases.

For instance, we are currently working on a report for Friedrich Ebert Stiftung (FES) to be published in autumn, which focuses specifically on companies in the cooked meal delivery sector. The report includes data from 18 cooked meal delivery companies covering their operations in 95 countries around the world. 527 protest incidents have been identified for the period between January 1st 2017 and May 20th 2020. The company with most incidents was Deliveroo, which accounted for more than a quarter of all protest events (28.5 per cent) and most events were centred in Europe. The most frequent type of action was strikes and log offs, (40.4%), followed by demonstrations (34.2%) and two-thirds of disputes (63.4%) related to pay. It was interesting to see that groups of workers were involved in the vast majority of events (85.1 %). This time, the report will also look into different coalitions between actors, illustrating that the most frequent type of coalition is mainly between groups of workers and established unions, followed by coalitions between groups of workers and independent unions.

Alongside these funded projects our overarching target is to keep extending the database. Cases increase and current inputs have now exceeded 1000 incidents. Our next project includes work funded by the International Labour Organisation (ILO) for a forthcoming edited publication on platform work. Our project will be the basis for one chapter, providing readers an overview of labour protest in the platform economy on a global scale based on twenty eight companies from different sectors with a particular focus on understanding developments in the global South.

Eventually, an interactive map will be developed which will render the findings available to all in an accessible and eye-catching way and is intended to serve as a shared resource for activists, unions, researchers, and policy-makers. The interactive map will be searchable and enable us to visualise the spread of platform labour protest across time and space. As the Index develops, it will become a unique resource for all those seeking to understand global patterns in the industrial relations of the platform economy.

In time, we hope that the Leeds Index becomes a comprehensive and valuable resource for researchers seeking to better understand patterns in platform labour unrest; as well as for activists and organisations trying to improve the conditions of platform work.